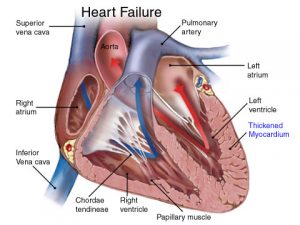 Congestive heart failure (CHF) occurs when the muscle fibers of the heart become damaged from arteriosclerosis (and blockage), coronary artery disease, high blood pressure, inflammation, faulty valves (regurgitation), or heart infections. The ventricles of the heart become bloated with blood that can’t be properly expelled. The heart fails to pump blood through the 60,000 miles of arteries and veins. This causes increased pressure in the circulatory system. The increased pressure causes fluid to escape from the blood stream and to accumulate in the tissues and organs. The symptoms of congestive heart disease include fluid retention, shortness of breath, chronic nonproductive cough, exertion-induced fatigue, and generalized lethargy. There are two types of heart failure: right-sided and left-sided. Right-sided heart failure occurs when the right atria and ventricle can’t keep pace with the left atria and ventricle. Left-sided heart failure occurs when the left atria and ventricle can’t keep up with the right side.

Right-sided heart failure causes blood to accumulate in the vessels leading to the heart. Excess fluid (peripheral edema) and swelling occurs in the legs, ankles, and feet. In left-sided heart failure, blood accumulates in the veins leading from the lungs and the lungs become filled with fluid (pulmonary edema). The person may experience shortness of breath on exertion or paroxysmal nocturnal dyspnea (shortness of breath that occurs after several hours of sleep).

Salt intake should be restricted since sodium worsens the symptoms of CHF.

Conventional medical therapy for CHF includes diuretics, ACE inhibitors, beta-blockers, and calcium channel blockers. Nutritional therapies for managing CHF include the following nutrients: Magnesium may prove to be the most important nutrient in facilitating optimal cardiovascular health. Studies have demonstrated that low magnesium levels decrease the survival rate in those with CHF, by almost 50 percent. Individuals with CHF should be taking a minimum of 500mg of magnesium citrate or chelate each day.

Hawthorne berry extract has been proven in double-blind studies to help reduce the symptoms associated with CHF. The recommended dose is 200mg three times a day. Numerous double-blind studies have demonstrated the importance of using the amino acid L-Carnitine in the management of CHF. L-Carnitine delivers long-chain fatty acids to the heart. These fatty acids provide 70 percent of the energy needed by the heart. Studies involving carnitine replacement therapy have shown that it helps reduce cardiac arrhythmia, angina (chest pain), total cholesterol (by 20 percent), and triglycerides (by 28 percent), while increasing HDL (by 12 percent). The recommended dose is 500mg three times a day on an empty stomach.

Coenzyme Q10 (CoQ10) has an impressive track record in regard to CHF and should be recommended to those suffering from congestive heart failure. In one study, patients were administered a modest 30mg of CoQ10 a day. All the participants in the study showed improvement and 53 percent were asymptomatic after four weeks. The largest study to date on CoQ10 involved 2,664 patients with congestive heart failure and was conducted in Italy. The results showed that individuals who took an average of 100mg of CoQ10 a day for three months noticed a drastic improvement in their symptoms. Percentage of those with improvement follows:

In patients with mitral valve prolapse, the ventricles contract, the redundant leaflets prolapse (flop backwards) into the left atrium, sometimes allowing leakage of blood through the valve opening (mitral regurgitation). In Severe cases, mitral regurgitation can lead and abnormal heart rhythms. Most patients are totally unaware of the prolapsing of the mitral valve. Others may experience a number of symptoms. Fatigue is the most common complaint, although the reason for fatigue is not understood. Patients with mitral valve prolapse may have imbalances in their autonomic nervous system, which regulates heart rate and breathing. Such imbalances may cause inadequate blood oxygen delivery to the working muscles during exercise, thereby causing fatigue.

These drugs slow the heart rate, which reduces cardiac output and leads to low blood pressure and fatigue. The brain and muscles then aren’t getting enough blood and oxygen, which can lead to fuzzy thinking, poor memory, depression, anxiety, and fatigue. Fatigue and depression are perhaps the two most common side effects. These drugs also deplete the body’s natural sleep hormone melatonin. Low melatonin leads to poor sleep, obesity, fatigue, and decreased life span.

In my experience, the best way to stop the symptoms associated with heart irregularities, including MVP, is to correct the underlying nutritional deficiencies. The first place to start is with a good multivitamin like the Optimal Daily Multi Vitamin  which all contain the key nutrients to help regulate the systems of the body, including heart rate.

Magnesium is especially important. Magnesium is a natural sedative that relaxes muscles, and the heart is, of course, mostly muscle. The smooth muscle contained in the blood vessel lining is also dependent on magnesium. Magnesium acts like a beta-blocker (without the side effects) by inhibiting stimulatory hormones including norepinephrine and epinephrine (hormones that increase heart rate). Fortunately, magnesium doesn’t cause fatigue or the other symptoms associated with prescription beta-blockers. The more magnesium found within a muscle cell, the more relaxed the muscle becomes. And a relaxed heart is a happy heart. Studies show that those with mitral valve prolapse (MVP) are deficient in magnesium. Others show that magnesium reduces the symptoms of MVP, including palpitations, chest pain, and fatigue.

Dozens of research papers have been written on how a magnesium deficiency can trigger arterial spasms, as well as muscle spasms. These spasms may be felt as chest pain, constipation, restless leg syndrome or leg cramps, headaches, eye twitching, or TIAs (transient ischemic attacks). The RDA for magnesium is 400mg a day. The estimated intake in the United States is 300mg a day, even less for those with fibromyalgia.

Magnesium is depleted by stress. The more stress a person is under, the more magnesium they need, use up and eventually deplete. But studies show as much as three times this amount, or 900mg, may be needed by the general population, especially by those predisposed to cardiac disease.

Do you have Headaches, Constipation, High Blood Pressure, Chronic Muscle Aches or Tightness, Restless Leg Syndrome, Leg Cramps, Low Moods, and/or MVP? If so, you may be deficient in magnesium.

Are you taking a good high-dose multivitamin/mineral supplement, yet still have problems with achy muscles or constipation? Is so, just add 150mg of magnesium at dinner. If you don’t have a normal bowel movement (BM) the next day, add another magnesium tablet and keep increasing each day until you have normal BM. If you take too much magnesium, you’ll have a loose BM – simply reduce the dose.

is a valuable nutrient for reversing MVP symptoms. The heart muscles need large amounts of CoQ10 for optimal function. Several studies have demonstrated that it can return heart function to normal. Patients need to take a minimum of 100mg indefinitely, as symptoms will usually return within 2 years of discontinuing therapy.

Cholesterol Lowering Drugs may Be Dangerous to Your Health

Most conventional medical doctors are convinced that statin drugs are harmless and should be routinely prescribed for anyone with cholesterol levels above 200. These doctors cite a number of studies in which statin use has lowered the number of coronary deaths compared to controls. But if we look a little deeper into these studies, we see that statin medications don’t significantly reduce the risk of death associated with heart disease.

Potential side effects of statin drugs: In fact, statins increase the risk of death overall. The British Journal of Clinical Pharmacology reported on an analysis of all the major controlled trials before the year 2000 and found that long-term use of statins for primary prevention of heart disease produced a one percent greater risk of death over 10 years, compared to placebo.

Statins, beta-blockers, tricyclic antidepressants, and benzodiazepine drugs can all suppress the body’s formation of CoQ10.

CoQ10 is an enzyme that works with other enzymes to keep the body’s metabolic functions working at optimal levels. Small amounts of CoQ10 are found in food, but blood levels of CoQ10 decrease with age, high blood pressure, statin use, diabetes, and atherosclerosis.

CoQ10’s main purpose is to increase the function of the mitochondria, the “power plants” in each cell. A CoQ10 deficiency can lead to diffuse muscle pain and weakness as well as fatigue, angina (chest pain), hypertension, anxiety, depression, poor breathing, accelerated aging, mental confusion, poor memory, tingling or pain in the hands and feet, and even heart disease.

A growing body of research shows that CoQ10 may benefit those suffering from any number of unwanted health conditions, including fibromyalgia, achy muscle pain, type-2 diabetes, periodontal disease, chronic fatigue, migraine headaches, skin cancers, infertility, cardiovascular disease, immune dysfunction, asthma, muscular dystrophy – even Alzheimer’s and Parkinson’s! And though there is some CoQ10 found in foods, getting enough in our diets is a challenge.

We find it in meat, dairy, and certain vegetables. But it would take, for instance, one pound of sardines or two-and-a-half pounds of peanuts to provide just 30mg of CoQ10. And, especially if you’re taking a medication that depletes CoQ10, you’ll need much more.

Dr. Karl Folkers, who has been honored with the Priestly Medal – the highest award bestowed by the American Chemical Society – for his work with CoQ10, believes that suboptimal nutrient intake in people is nearly universal and that these tendencies prevent the biosynthesis of CoQ10.

He suggests that the average or “normal” levels of CoQ10 are really suboptimal, and that the very low levels observed in advanced disease states are only the tip of the deficiency iceberg. Unless we are supplementing with CoQ10, we may be in fact suffering from a CoQ10 deficiency, especially considering the added stress posed in today’s society and the need for an ever-increasing amount of antioxidants. Could it be that many (if not all) of our chronic illnesses are indirectly linked to a CoQ10 deficiency?

This biosynthesis of CoQ10 from the amino acid tyrosine is a complex, highly vulnerable, 17-step process. It requires at least seven vitamins (B2, B3, B6, folic acid, B12, C, and B5), and a number of drugs used to treat fibromyalgia are known to deplete the body of some of these vitamins.

We also tend to absorb and utilize less CoQ10 as we age. It doesn’t take much of a decrease in absorption for our health to suffer.